Go Back To All Adoption and Orphans Articles

When Laura and Steve Byers traveled 5,000 miles to Ukraine, they didn’t know the name of the little girl they would adopt. They had no idea what she would look like, or how old she would be. And they couldn’t comprehend how much she would change their lives. “How will we know it’s her?” Laura […]

When Laura and Steve Byers traveled 5,000 miles to Ukraine, they didn’t know the name of the little girl they would adopt. They had no idea what she would look like, or how old she would be. And they couldn’t 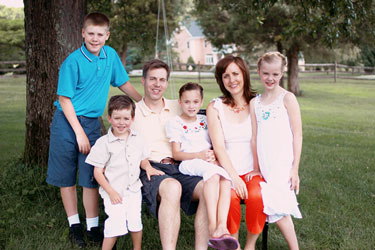 comprehend how much she would change their lives.

“How will we know it’s her?” Laura had asked their translator.

His answer was simple: “You’ll know.”

Unlike many countries, the law in Ukraine does not allow adoptive parents to preselect their child. The Byers had made the long trip from Maryland on faith, trusting that God would lead them. After they arrived at the government agency in Kiev, they were given a large book and told that they’d have about an hour to choose the child who would join their home.

The book was filled with pictures of boys and girls who had no moms or dads. “There were a lot of really difficult situations,” Laura says.  As the minutes on the clock clicked by, the government worker pulled out some additional files for them to consider.

When they opened Avonlea’s file Steve said, “I think that we should see her.”  He had been drawn to her eyes. “Her facial expression was so sad … but you could tell there was something very bright about this girl. She was very pretty.”

And because of her natural beauty, Steve recalled some statistics that he had read about children who age-out of orphanages in Ukraine. About 50 percent of the girls turn to prostitution.

The orphanage director told the Byers that Avonlea had nobody. “She has no family … She has no one who wants to adopt her …”

“Those words, they pierce you,” Laura says. “That’s a very sad thing to hear.”

It was February 2012 when Laura started to seriously consider the plight of the orphan—how heartbreaking it is for a child to have no family. At that time she was at the airport to meet her friends Heather and Erik, who were bringing their new daughter home from Ukraine.

The little girl, who had blonde hair and blue eyes, seemed understandably timid and exhausted after traveling halfway across the world.  Laura was struck by the fact that if Heather and Erik had not taken such drastic steps to pursue this child, “she more than likely would never have been adopted.”

A few weeks later Laura asked her husband what he thought about filling the spare bed in their daughter’s room. “The conversation unfolded,” she says, “and he listened to what God was doing in my heart.” Laura believed that the Lord would give both of them a mutual desire to adopt if it was something that He wanted them to do.

Within the week, Steve told Laura that he had been praying about the possibility of adoption since meeting their friends’ Ukrainian daughter for the first time. He spoke of the 143 million orphans around the globe. “I think that all of the statistics and magazine articles that I had ever read were kind of thrown out the window at that moment,” Steve says. “These hard cold numbers suddenly turned into this beautiful little girl who needed a mom and a dad.” 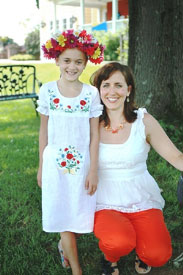 The Byers started working with Lifeline Children’s Services, an adoption agency in Alabama. About a year later they met Avonlea in the Ukrainian orphanage.  Avonlea’s head was downcast when she walked into the room to meet her prospective parents. Still, there was something about the little girl that drew the Byers to her.

When Laura held Avonlea’s hand, she remembered the translator’s words about how she would know her child. She had an overwhelming sense of peace; Avonlea was to be their daughter.  Tears filled Steve’s eyes, “It was not so much that we were coming to her, but that God was presenting her to us.”

Now knowing who they had come so far to adopt, the Byers began a rigorous schedule that included visits with Avonlea, paperwork, appointments with doctors, and court dates. Steve returned to Maryland while Laura finished the final details in Ukraine, which included a 10-day waiting period (to allow anyone to contest the adoption).

Finally, on February 5, 2013, it was time for Laura and Avonlea to go home. When they arrived at Washington Dulles International Airport they were welcomed by a myriad of friends and family. The three other Byers children—Addison, Adelaide, and Avery—held signs that they had made for their new sister.

Today Avonlea is adjusting well to life in her new family. She and her sister are very close; Laura describes them as “two peas in a pod.” Now 5 years old, Avery still prays, “Lord, thank you that we ‘odopted’ Avonlea.”

Since adopting Avonlea, the Byers developed relationships with other families who have adopted children from her Ukrainian orphanage. “We found ourselves in this little adoption family,” Laura says. The Byers held a reunion for the girls in June 2013. When 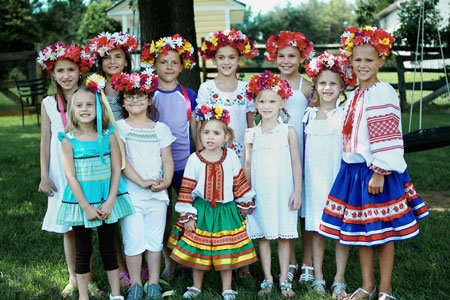 Avonlea saw her best friend from Ukraine, she was overjoyed.

As the adoptive parents of the 11 girls gathered that reunion weekend, they realized the significance of the occasion. “Just to see the joy in their eyes,” Laura says, “to have a connection to a child’s past … is a gift from God.”

Avonlea and her “Ukrainian sisters” are no longer cold statistics of orphans who will age-out of a governmental system. Instead, they are each beloved children, each in forever families of their very own.

Copyright © 2013 by FamilyLife.  All rights reserved.