Go Back To All Miscellaneous Articles

When I see God using us to change lives, it stokes my passion for families. 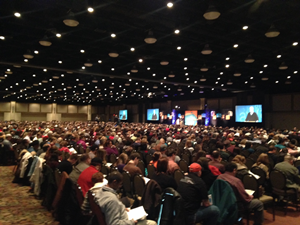 Each time I speak at a Weekend to Remember® marriage getaway, I am overwhelmed with how God is working to transform marriages and families.

I’m writing these words after speaking at a Weekend to Remember in Hershey, Pennsylvania, over Valentine’s weekend.  The East Coast was hit by a huge winter storm just before Valentine’s weekend, but 1,900 people still braved the elements to attend the getaway in Hershey.  One church brought 49 couples.

And I have no doubt that the effects of this weekend will be felt for generations to come.

A couple came up at the end and the wife said that three weeks earlier she had her husband arrested.  “This weekend has been a transformation of him and our marriage,” she said.  She also mentioned our recent FamilyLife Today® series about Bill and Vicki Rose, whose marriage nearly fell apart from drug abuse and anger. “We are that couple!” she exclaimed.  Her husband shook my hand and told me he is going to start praying with his wife and he already has a group of men going through the Stepping Up® Video Series with him.  They asked if I’d serve as witness as they signed their marriage covenant and then sign it … and I did.

I’ve never had so many men tell me that they listen to FamilyLife Today. They came up to hug me and thanked my co-host, Bob Lepine (who also spoke at Hershey), and me for equipping, coaching, encouraging, and exhorting them along the way.

At one point during the weekend I told the story of Molly, our granddaughter who was born with brain damage and lived only a few days.  At the end of the weekend two women approached me—a young lady who has had 10 miscarriages and a mother whose adult daughter had committed suicide on the one-year anniversary of the death of her baby.  They asked for the words that are on Molly’s grave marker:

We cannot, Lord,
Thy purpose see,
But all is well
That’s done by Thee.

Couple after couple told me they had attended the Weekend to Remember five times, seven times, nine times.  They are committed to continuing to build a marriage that will last a lifetime.  And tons of young couples, just starting out.

There were lots of folks grabbing a tool and taking it back to impact their friends.

Loads of folks interested in the upcoming I Still Do arena event at the Verizon Center in Washington, D.C., October 4.

Lots of men who told me of the impact of the Stepping Up video series.

A chief of police gave me his card and told me to call him on his cell phone some time. He said that FamilyLife Today has been used by God in his life in a great way, and the show got him to the Weekend to Remember. His brother is a preacher and his dad is a deacon, but he’s been resistant to God. He said the Weekend to Remember was used by God to turn his life around.

And person after person (as many as 100) stood in line to look me in the eyes with the utmost sincerity, shake my hand, and just  say, “Thank you for what FamilyLife does for families.”

Experiences like this continue to stoke my fire.  I’ve been speaking at these conferences for nearly 40 years now, but I remain as passionate as ever about reaching out to families.  Our culture is full of people who desperately want to build a solid, loving marriage and family … and have no clue how to do it.  God has given FamilyLife the opportunity to give answers to couples who are desperately seeking help.

When you see God working to change lives, it doesn’t get any better than that.

Copyright © 2014 by FamilyLife. All rights reserved.