Would She Walk Out on Her Marriage?

Troy and Sara Groves once said divorce was not an option. But they didn’t anticipate the struggles they’d face with weaknesses, expectations, and bitterness. 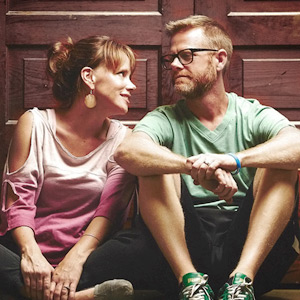 Singer, songwriter, and seven-time Dove Award nominee Sara Groves penned these words in her song, “When It Was Over”:

When it was over and they could talk about it,
They were sitting on the couch.
She said what on earth made you stay here
When you finally figured out what I was all about?
He said I always knew you’d do the right thing,
Even though it might take some time.
She said, Yeah, I felt that and that’s probably what saved my life. 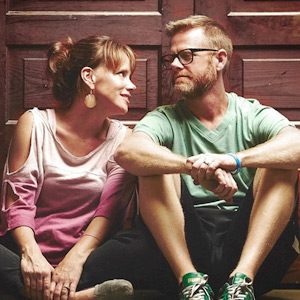 her husband, Troy. Their seventh year of marriage proved to be a difficult time for them both—bitter and dark. It took Christian counseling, a lot of grace-filled honesty, and a firm foundation from a small-group study they attended as newlyweds to get them through it.

Sara and Troy were just like any newlywed couple at their church. She was a school teacher and Troy worked a regular nine-to-five job selling radio advertisements. They had quite a few friends in their hometown who were involved with FamilyLife, and their newlywed group at church used FamilyLife’s small group study resource called HomeBuilders Couples Series® (now called The Art of Marriage® Connect series) as their curriculum. Both Sara and Troy came from homes with healthy marriages, but they went to the HomeBuilders class knowing that a good marriage was not a guarantee.

For three years, Sara and Troy were submerged in the practical biblical teachings that dealt with a variety of topics from finances to communication. “You don’t really know what you’re going to run into in marriage until you run into it,” Sara says. The young couple would have a fight or Troy would say something insensitive that would badly hurt Sara’s feelings, but the class helped her talk about the situation, and then it wouldn’t seem so bad anymore.

But then God began to open doors into the music industry. Sara went from being a teacher to singing and performing on a regular basis, and Troy became her manager. “When we started going on the road, we made a list of five objectives, and number one was that our marriage would remain strong,” Troy says. “When we had to make choices, we would ask ourselves if this would be positive or negative for our marriage.”

Even though Sara knew staying married was the right thing to do, she didn’t want things to be like they were anymore. “I was contemplating leaving, starting over,” she says.

Sara got to the point where all she could see were the daily failures she observed in Troy—though she now realizes that what she considered to be failures were really just disappointments from her own standards of how she thought he should live. “My expectations had become a poison,” Sara says. “There was no way he could live up to what I intended for his life. His weaknesses weren’t bad; they were just weaknesses, just like mine, but I couldn’t see that at the time.”

They had learned through the HomeBuilders studies, however, that marriage was more than a relationship. It was a covenant created by God. They had decided long ago that divorce was not an option.

And their marriage was as much a ministry as their music was. What they did, they did together—a united front for all those people who saw God through their music. “It wasn’t just about the music or the show,” Sara says.  That’s when they decided to get help from Christian counselors who specialized in couples in the music industry.

The beginning of healing

The first day of counseling put humanity back into their marriage. They were finally able to lay down the anger and just be honest with each other … about their fears, weaknesses, and disappointments. “It surprised me how quickly anger turned into empathy,” Sara says. “I looked at him in that moment and realized that he’s becoming something in Christ, and that’s a wonderful thing. I had to choose—am I going to be the one nagging and criticizing as he goes through this journey, or the one to see the person he’s becoming and help him?”

It was the beginning of the healing.

Weeks later, when the couple had worked through the majority of their problems, Sara asked Troy, “When I was coming back to my senses, what made you lean into me?” And he responded, “Because I knew you were going to do the right thing.”

“His words gave me strength and courage, knowing that he believed in me to do what was right,” Sara says. At that moment, she was overwhelmed with joy. She knew then that they were going to make it. The love they used to feel was back, “and it was even more because we had weathered the storm,” Sara says.

Now married for 21 years, Sara attributes their success to what she and Troy learned in those first three years of marriage participating in the HomeBuilders small-group studies. “Doing HomeBuilders wasn’t just a Bible study for new couples,” Sara says. “It was very rich counseling once a week for three years.” Troy agrees. “It was more than just a Bible study or a class,” he says.

Even during the tough times, those principles sustained the couple. Just the resolve to take divorce out of their list of options was a basic theme in the HomeBuilders studies that kept Sara from walking out of her marriage. She knew there had to be a way to work it all out for God’s glory.

Sara also says the small-group studies helped them identify the problems they were dealing with—especially with communication, roles of men and women, and bitterness. “We had a name for it, when others couldn’t fight it because they didn’t know what to call it,” Sara says. Because they could define the issues, they knew how to get help. The couple knew it wasn’t just one person’s problem; they both had to admit their faults and walk with grace.

In a culture of short-lived relationships in which couples give up when faced with problems, Sara and Troy saw how working out their difficulties lead to a stronger bond. Referring to the fairy tales portrayed in romantic/comedy movies, Sara says, “We’re so inundated with ‘Rom-Com’ mentality that we can’t get deeper anymore. The main thing is letting grace abound. Grace is real. We have such an individualistic drive, but we have to have grace on each other. It’s hard work.”

Troy agrees. “Many couples that we grew up with have split up,” he says. “But 20 years ago, we were in that class with 15 other couples, and none of them are divorced or even close. They have good marriages.”

There’s something to be said for starting out your marriage with the foundation of godly principles. “We tell everyone we meet—if your church doesn’t have a newlywed class, grab a mentor and start [The Art of Marriage Connect] class,” says Troy.